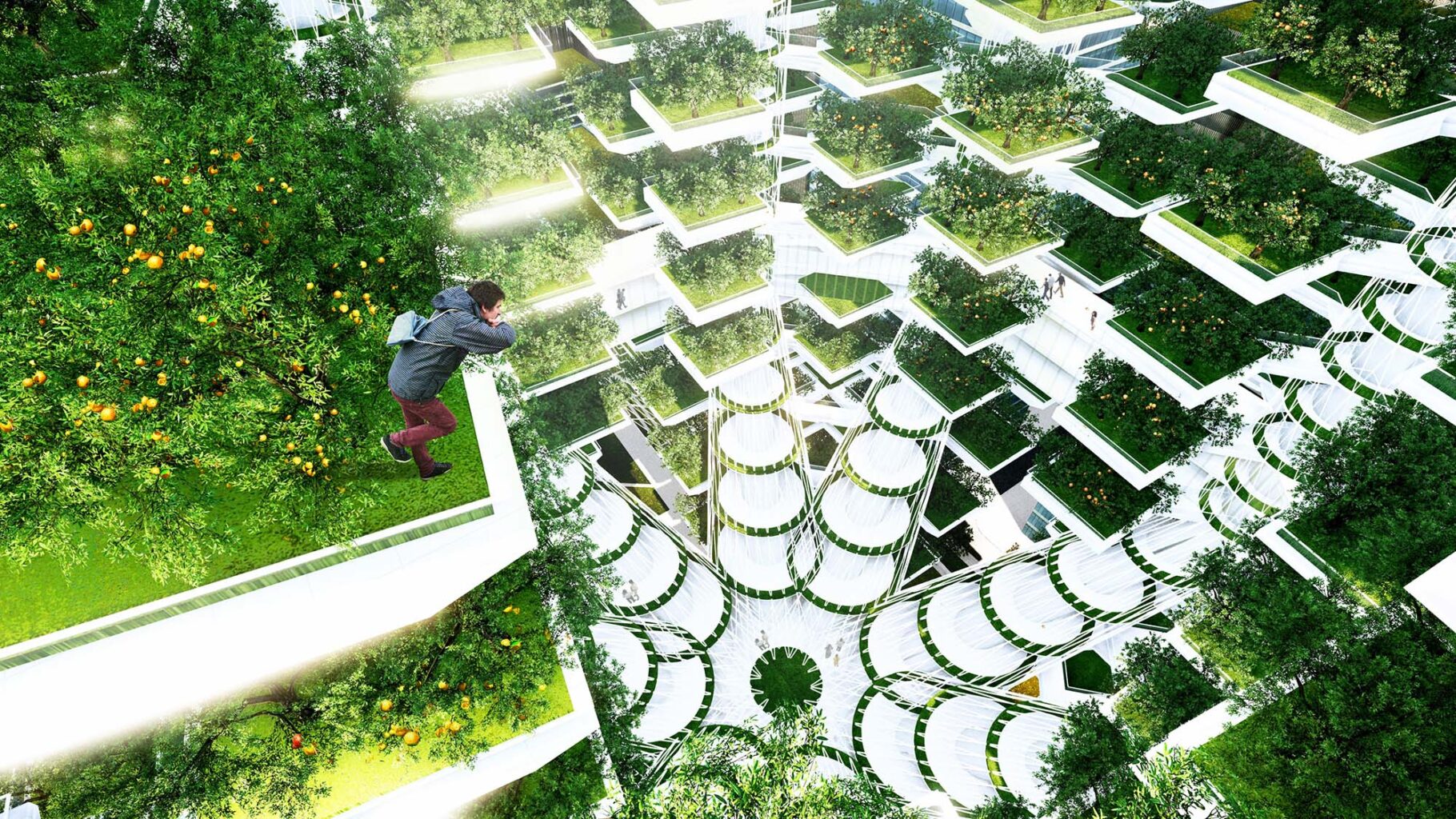 Prototype of the vertical urban farm project, skyfarms have revolutionized the agricultural industry in a radical way. According to the United Nations Population Division (2009), the world population is set to jump from 6.9 billion in 2010 to 9.2 billion by 2050 — leaving an added 2.3 billion mouths to feed, and a dwindling amount of arable land to supply for the loss.

To help combat the projected swell of human population and lack of resources, skyfarms created their own indoor farming techniques and controlled-environment agriculture (CEA) technology, that controls economic conditions manually. A few of the many benefits of skyfarms include: generating clean energy, purifying wastewater, using less fossil fuels than outdoor farming, eradicating runoff, and producing an abundance of fresh fruit, vegetables and grains.

As expected, many countries began constructing skyfarms to give back to the struggling ecosystem. Below are 3 countries with successfully implemented skyfarms: 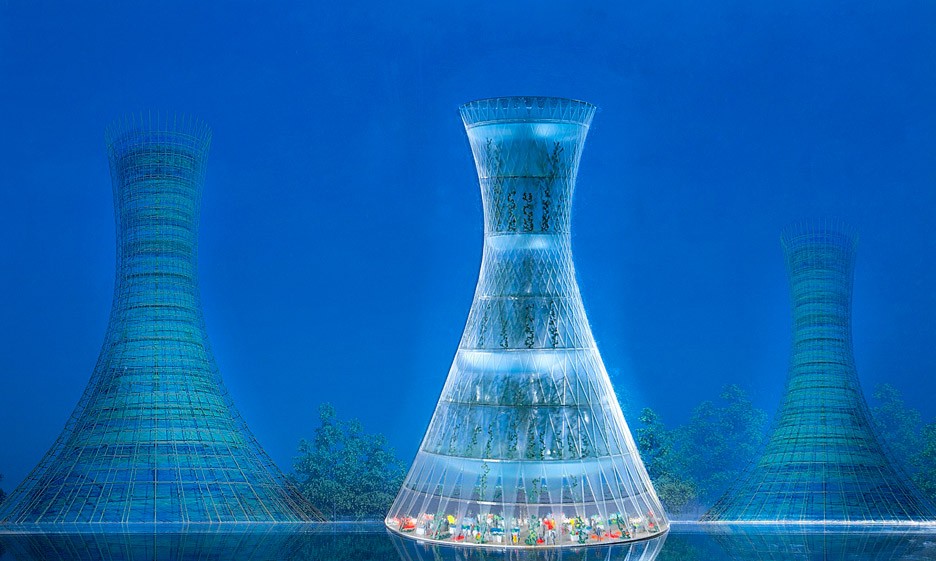 The London firm, Rogers Stirk Harbour + Partners  paired up with Skyfarm to see if their eco-friendly, indoor agriculture methods lived up to their lofty promises after all. Roger Stirk Harbour + Partners created a multi-storey hyperboloid, bamboo-framed structure that incorporated traditional planting to aquaponics. The team later went on to name the self-sufficient, energy producing, vertical farm—Skyfarm. Clearly, something about skyfarm worked, as it was named winner of the 2014 Worlds Architecture Festival’s Future Projects Experimental category for its elegance and high quality. 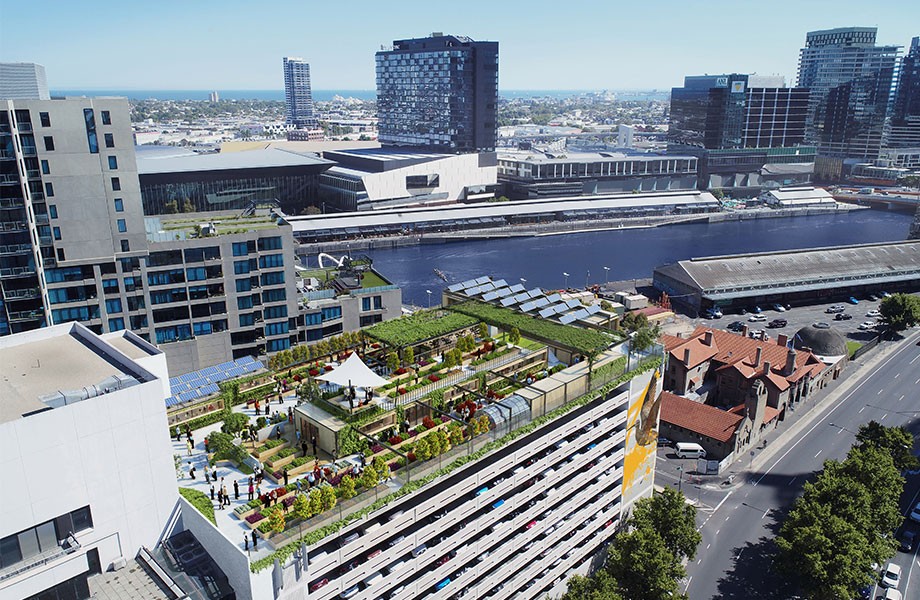 A group of Melbourne-based companies collaborated to turn a 2,000sq rooftop parking garage into a farm in the sky. The project, titled Skyfarm, is set at Melbourne’s $450 million Seafarer’s precinct, and seeks to expand biodiversity in the city and spread the word about urban farming.

The farm’s goal is to support students’ education and access to resources, while also providing conference facilities and dining services to students.

Additional partners of the project include The Sustainable Landscape Company, and OzHarvest. OzHarvest and Second Bite were charities the project that donated waste and practice-free farm produce to equally. 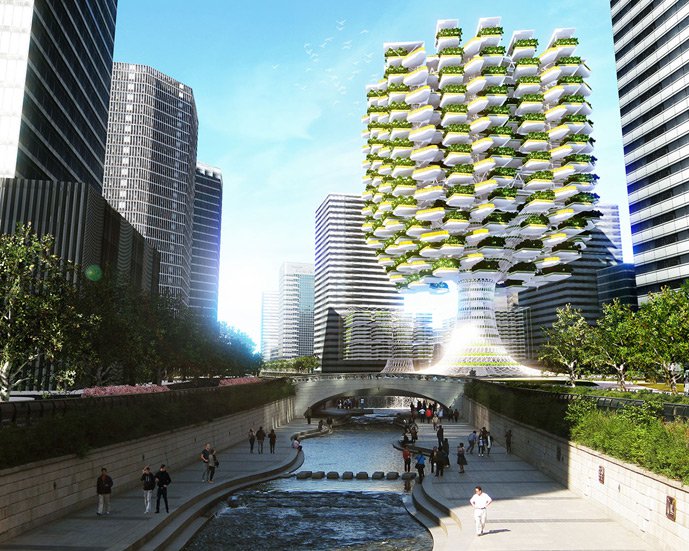 As you can see from the picture above, Aprilli Design Studio’s concept for Urban Skyfarm was inspired by the idea of a tree-like skyscraper. Although the skyfarm design was conceptualized with Seoul, South Korea, in mind, Aprilli remained open-minded about the possibility of constructing the skyfarm in a different city. In addition to providing food, the skyfarm also improved environmental quality of the city’s water and air, and generated a renewable energy output.

The center trunk is separated by eight vertical branches that are connected by trusses to maintain its sound structure. On each branch, you can find 60-70 farming desks as depicted as the leaves of the tree. Each deck is separated as much as possible to guarantee ample sun exposure. The deck also has LED lighting systems which are used to create the most suitable environment for their crops.

Skyfarm now stands as a powerful figure that represents a place for all visitors to nourish their bodies, relax, and enjoy the oasis at the heart of the city.

To learn more about Portella’s individually engineered, high-quality steel doors and steel windows, contact one of our experienced professionals to request a quote personally tailored to help you achieve your projects personalized design goals.